Tag Archives: Against the Cage

Please join me in congratulating my lovely friend Melynda Price on the release of this wonderful novel! I had the honour of an ARC and I LOVED it!! If you love an MMA romance with steam, suspense and passion then you NEED to read this book!! 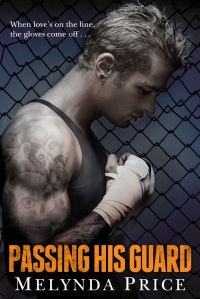 When a MMA fighter clashes wills with a sexy private investigator, the gloves come off…

Aiden “Disco Stick” Kruze walked away from it all—money, family, friends, and a successful career as a lawyer in Manhattan—to pursue his dream of being an MMA fighter. When a sexy private investigator shows up at Aiden’s gym, he mistakenly assumes she’s a cage-banging groupie.

Ryann is determined to haul Aiden back home. She’s desperate to claim the reward money that will pay off her father’s creditors before the man who killed her father comes to collect from her.

Aiden is done living his life under the microscope of being a senator’s son. He’s not going back to New York—ever—and there’s nothing this tenacious redhead can do about it. Or is there?

When the demons of Aiden’s past catch up with him, he realizes the lies, deception, and betrayal run deeper than he ever imagined. Aiden must put his career and his life on the line to save the woman who’s stolen his heart.

The gritty, rough, and hot-as-hell MMA men of the Cage Fighting Association never surrender. Each has his own battle-scarred past, and each has a reason to resist the biggest takedown of all: love. But when these fighters meet their matches, the battles in the cage pale in comparison with the sparks that fly outside of it. Against the Cage, Melynda Price’s MMA romance series, is big on action and high on heat, with alpha males who are just as unforgettable as they are irresistible.

Melynda Price is the author of several contemporary and paranormal romance titles, including Win by Submission and Passing His Guard in the mixed martial arts–themed Against the Cage series. Price writes for ardent readers who want to fall in love over and over again. She makes the unbelievable believable while taking her characters to the limit with tales full of passion, heart, and unexpected twists. Salting stories with undertones of history whenever possible, Price adds immeasurable depth to her well-crafted books. She lives with her husband and two children in northern Minnesota, where there are plenty of snow-filled days to curl up in front of the fireplace with a hot cup of coffee and write.

“What are you doing?”

Ryann didn’t even try to disguise the alarm in her voice when Aiden came swaggering out of the bathroom towel drying his hair in nothing but his underwear. The boxer briefs rode low on his waist, clinging to his thighs and hugging his ass. Hanes never looked so good. The black cotton stretched taut over an impressive piece of male flesh hanging between his thighs, the detailed outline leaving nothing to the imagination.

His arms were up, displaying a roadmap of muscled abs and sculpted obliques. Not a spare ounce of flesh adorned this man’s body, a body he clearly had no shame in putting on display. Then again, why should he?—he was absolutely gorgeous.

Aiden froze at her alarmed outburst and canted his head, looking at her from beneath the towel. “What’s it look like I’m doing? I’m getting ready for bed.”

His brow arched, more in amusement than in question she suspected. “What do you propose I wear, Ryann? I don’t suppose you happened to grab my duffel bag when you were abducting me.”

“I didn’t think so,” he grumbled, tossing the damp towel on the chair as he walked past her side of the bed. Unable to tear her eyes from his incredibly hard body, she watched as he ambled to his side of the bed and flopped down, hands laced behind his head, long legs crossed at the ankle. The unforgiving mattress bounced like a trampoline, throwing Ryann into him. Her hand shot out to stop her trajectory and landed solidly on his chest. Eyes remaining closed, he chuckled. A low throaty rumble vibrated beneath her fingers, traveling up her arm like a seductive shockwave.

Aiden cracked open an eye, pinning her with that heart-stopping amber stare. “Not tonight, honey. I have a headache.”

She gasped. Shock and outrage made her impulsive and reckless. Without thinking better of it, she grabbed the flat disc of his masculine nipple and pinched him—hard. Aiden flinched, barking out a surprised curse.

“You’re going to have a lot more than a headache,” she snapped, refusing to let go, and taking sadistic pleasure in wiping that arrogant smirk off his too handsome face. But her win was a short victory, at that. Perhaps she should have considered the wisdom of taking on a MMA fighter because in less than two seconds she was on her back, arms pinned above her head as his body pressed her into the rock hard mattress.

She couldn’t tell if he was angry or playing—perhaps a little of both. “Let me up,” she bucked her hips, a pathetic attempt to displace one-hundred and eighty-five pounds of hard muscled fighter.

He didn’t budge. She struggled beneath him, trying to work herself free, but his grip only tightened, his body hardening to stone as a low growl tore from his throat. “Fuck, Ryann, quit moving.”

“Not until you tap.”

“What? You’re insane. I’m not tapping for you.”

“Then get comfortable, sweetheart, because until you do, I’m not moving.”

For good measure, Aiden ground his hips between her parted thighs, letting her feel the full force of his arousal against the sensitive bead of her sex. A jolt of heat arrowed into her core, releasing a floodgate of desire she’d been fighting like hell to hold back. Damn him. The thin cotton of her pajama pants provided little barrier to his Hanes-covered cock, and soon her body’s moisture would betray her aching need for this man.

Pride and principal warred with self-preservation.

“Tap,” he mocked, arching his pierced brow, daring her to push him further.

Aiden chuckled, a deep throaty rumble she felt all the way to her toes. With eyes locked on hers, he lowered his head, stopping just before his lips would brush against hers. Seconds ticked by. Her breath stalled in her lungs. He wouldn’t…would he?

“Tap,” he growled. The moist heat of his minty breath kissed her lips but his flesh did not. He was bluffing…right? Did she really know him well enough to take that risk? By the unwavering intensity of his amber stare the answer to that would be a “no.” Apparently sleep deprivation was skewing her good judgment because the insane impulse to see how far this fighter was prepared to go in order to win was too tempting to resist.

He thought he had her all figured out, did he?—thought that he could intimidate her with his body, bully her into submission. Well, he had another thing coming. Someone should really teach this guy a lesson, and Ryann was just daring enough to volunteer.

“You want me to tap?” she whispered, smiling sweetly. “You first.” She closed the scant distance separating them and kissed him. Aiden froze. For a moment, she thought he was going to pull back. When he didn’t, she couldn’t help but smile against his lips—another win. He didn’t move, nor did he kiss her back, holding himself stone-still as if not certain he trusted her motives. Smart man.

What the hell was she doing? Which seemed to be his mirroring thought when he tensed as her tongue traced his bottom lip, teasing over the loop piercing. His breath passed his parted lips in shortened pants. He seemed to be at war with himself, the energy coiled inside him stringing his muscles ripcord tight.

If she was honest, she’d admit to using this game to sate her wicked curiosity. Did he really taste as good as she remembered, kiss with enough skill and passion to wipe all reason from her mind? What would it take to break this fighter?—to make him tap?